Although I’ve blogged previously about using LaTeX for academic writing I wanted to try groff out for the less complicated task of letter writing - groff being similar to LaTeX but far less popular. Using a typesetting system such as groff instead of word processing software has several advantages: saving documents in plain text is memory efficient, easily searchable and scores highly for digital preservation (proprietary word processing file formats tending to eventually obsolesce).

View on screen with Zathura

Assuming you have the Zathura document viewer installed at the terminal type:

This command pipes postscript into Zathura’s standard input with the following result: 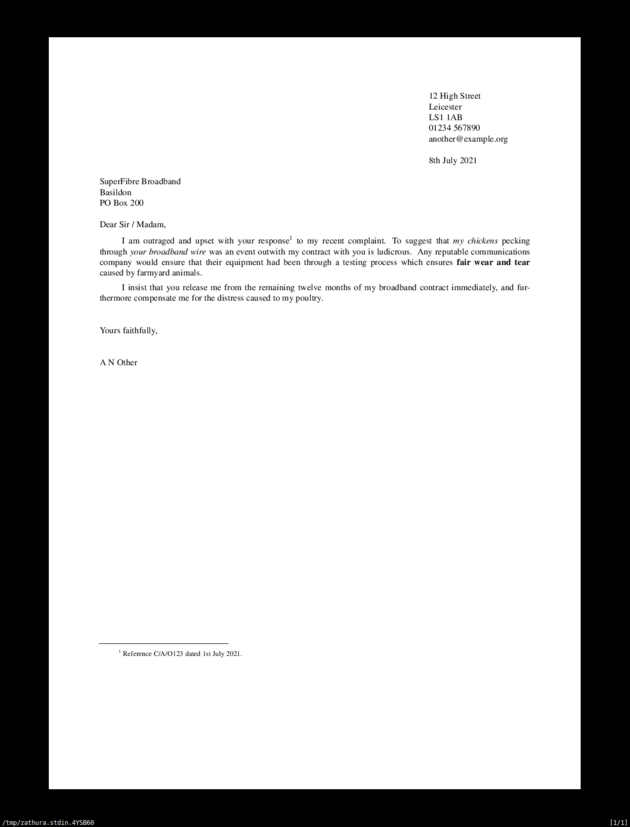 Assuming a default printer has been set, then we can also send the postcript directly to the printer:

As with the previous command this instructs groff to format for A4 sized paper.

The previous commands avoided the use of PDF all together, but if you would rather save in that format, then adding the -T flag indicates you want the output something other than default postscript:

As groff is very low-level then macro facilities are grouped together into packages to allow routine operations (such as footnotes) to be done efficiently. Me is one of these packages, although far from the only option; in fact a new macro package, -mk, was released this very month. The -me flag on the command line informs groff this notation is being used, likewise the recommended file extension to use is .me.

I guess the one obvious question is why use groff at all, as opposed to LaTeX? Possibly because there is something satisfying about learning modern uses for an application whose lineage dates back to 1964. Or maybe just, to paraphrase George Mallory, because it is there? Thoughts, observations? Feel free to add below.